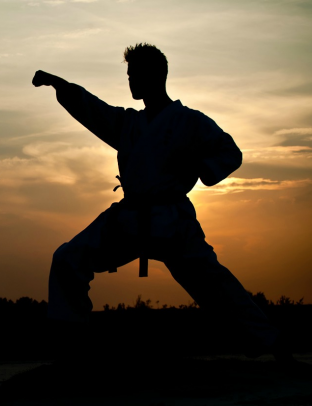 As a student of Sensei Kimura and training amongst his high level students during my early years in Karate, I was fortunate to have a lot of good stuff rub off on me. The Dojo was infused with hundreds of years of accumulated “sweat wisdom”  from his top students and instructors. I learned by being immersed in the environment……eating, sleeping, training and working in the Dojo for years.

When I first met Sensei Kimura, one of the things he said to me was: “what I teach is…..you go into a room to fight, put the key on the table and the winner gets to open the door and leave.” Meaning that he taught what works in real combat, no rules and no referees. He said “tournament is a necessary part of Karate but it’s not realistic, it is just a tagging game, you need a referee to see who wins.”  He would often say that Karate is made up of a lot of pieces; Kata, impact, Dojo sparring, self defense, tournament, grappling and throwing, even wood breaking. Each had its place and each had its value.

As time passed, my training with him consisted of hours of repetition with constant adjustments to my technique, and testing the technique to make sure what I was doing worked. Impact training and sparing were always in the curriculum even during Kata practice. I learned that Kata was fighting and not just posing in stances, that the mindset developed through Kata was necessary for combat, and the moves in the Kata were a way of developing muscle memory so that the technique would become instinct. He always stressed Zanshin (readiness or remaining mind) after completing a move or sequence (very important in self defense). He said that Kata was the storage facility for self defense moves and that some moves however useless they seemed, were there to teach us something.

Many arts have a version of Kata, music has scales, a boxer will practice his jab on the bag for hours, a golfer will hit a bucket of balls at the range and a police officer or soldier will practice for hours to improve firearm proficiency. Some Katas require that you have a partner as in Judo, other Katas are done as a form of moving meditation or “Do-zen”  like Tai Chi. When you learn to drive a car you’re performing a Kata, with all of the protocols involved to imprint safe driving habits.

I began my training in Karate when I was about 12 years old. I thought Kata was a fun way to practice fighting multiple bad guys just like in the movies, but once I learned the moves I was ready to learn the next Kata. Hey……I had perfected it so naturally I needed to move on. This is how it is for many beginners, they could never imagine how intricate the technique could be, and that if you only ever learned one or two Katas in a lifetime, it would really be sufficient. There is nothing wrong with learning many Katas, it adds more depth to your understanding, however, spending time improving one Kata will improve all other Katas as well……..a rising tide raises all ships!

As we age, Kata becomes a useful mode of conditioning the body and mind, without the harshness of Kumite. In Kata our opponent is our self, so this is one place where we can destroy our opponent without actually hurting anyone, and if we are honest with ourselves we will know which one of us really won  the battle. In most cases it is the imaginary you that wins.

When I was a kid we had painting by numbers that made it easy for non talented painters like myself, to paint pictures. You had a canvass with a drawing on it and numbers that corresponded to paints. Just match the paint with the numbers on the canvass and you had a masterpiece (as long as you squinted real hard and didn’t get too close).

Kata is very often performed the same way, many people think that as long as they go through the moves and their form looks correct, they are doing Kata…….again lots of squinting is required. For beginners this is ok but as we progress we come to understand that there is much more to it. Leftover energy at the end of a movement (torque, converted to torsion along with the elasticity of the muscles and tendons) is stored and when needed released into the next move, sometimes enabling us to recoil from an attack like a Cobra. No matter how many moves in a Kata, there is really only one movement, they are all linked together by the building, storing and releasing of energy. One move begets the next, and a subtle blending between moves takes place as a painter blends the colors on the canvass. This creates flow, and a grace of movement that is both efficient and powerful, building crescendos and lulls into the personality of the Kata. There is never a relaxed or “unready” moment, your body is always primed for action and moves become a series of releases throughout the Kata piggybacked on one another subtly and unnoticeable to most observers.

We see a lot of Kata by numbers and sadly in some cases it is perpetuated by tournaments (all style ?). Competitors see what the judges are looking for in the competition and adjust their Katas accordingly over time. If the judges are on the wrong track…….Kata quality goes off track!

At tournaments competitors perform their Katas outwardly while the true Kata should only be experienced inwardly. Subtle movements and breath control are often missed by judges and audiences, while large, flashy movements are appreciated beyond their value. In order to impress the judges and audiences, the Kata will often be performed without conveying its true meaning, all for the sake of  winning. Our goal is always to win, but Kata should really be done for the self, it should be done without an audience and without ego, it should be a spiritual experience done with the goal of improving one’s ability. If a Karate-ka competes in a Kata competition, they should mentally eliminate the audience and judges and act as if they are not competing but performing their best version of the Kata for their own benefit. When a competitor is conscious of being watched, their whole psyche and presence changes and their performance is no longer honest. They should not be satisfied or disappointed by the judges verdicts but only by their own (or their instructor’s) honest evaluation of their performance.

Think of Kata as a book consisting of several short stories. Each set of sequences opens a new chapter of techniques. Bunkai is the analysis or examination of a technique and its application. It is the explanation and real time practice of the techniques not just to improve the Kata, but mostly to create proficiency in a combat situation. You can see  a student’s face change and project confidence after practicing Bunkai, movements have more purpose and the Kata becomes more meaningful as a result.

For Bunkai to have an effect, we need to “extract” the techniques from the sequences in the Kata, analyze, and practice them with a partner until we become confident that they  would be effective in combat.

Karate Ni Sente Nashi…..there is no first attack in Karate!

Karate is practiced as peaceful combat, only used as a method of  defense, and the Karate-ka should never create the reason for this defense. For this reason you will notice that almost all Katas begin and end with a block. For those that don’t, it is implied that the move is preemptive and the practitioner did not create the reason for the attack.

In Shukokai and most legitimate Japanese or Okinawan styles we have Pinan Katas (pronounced Pingan) to introduce Kata to the beginner. Pingan means “peace” in Chinese. It comes from the Chinese influence in Okinawan Karate. In Japan these Katas are called Heians, also meaning peace.

Kata is Karate’s soul, the “Art” in Martial art………the poetry of Karate.
Kata is part of the Budo, it helps us become great fighters without becoming fighting machines, it tempers us and gives us heart, it allows us to be students for life.