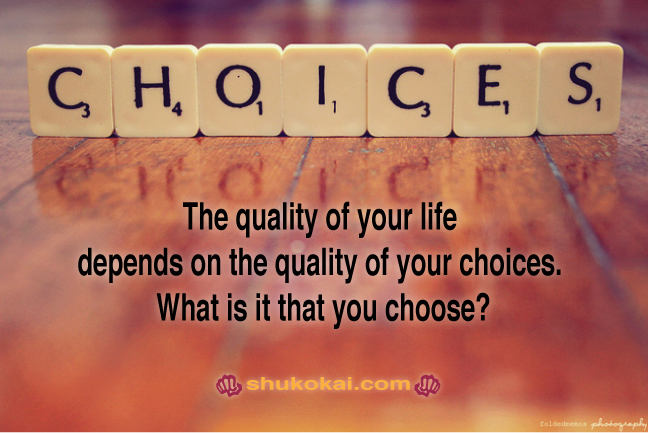 Apart from the blocks, punches and  kicks taught at karate, there’s are lots of other important lessons learned. These are often lessons that help build character, discipline, focus, creativity, patience, perseverance, temperance, respect, self control and other traits that will help our children become better people as they traverse through life.

In one of the children’s classes this week, Sensei Linda asked the students WHY they came to karate. The answers were varied but came down to two main reasons: either the students chose to be there or their parents chose for them to be there. Whichever reason applied to any one student, Sensei Linda emphasized that it is in fact all about making choices.

How well each student did and what they successfully learnt would be the result of what they themselves chose to learn and how much effort they chose to invest. If a student chooses to learn with a positive attitude, they are bound to progress and to help create a positive environment for their fellow students to progress as well. If a child elected to choose a negative behavior, so too would the result and influence on the others be negative. If each student approached each class with the choice of “I am here to do the best I can” there is no doubt that each and every student would advance according to the best of their ability and at the same time expand the limits of the ability.

Sensei Linda asked Sensei Gavin to enlighten the students with his own choices and life experience and to answer some questions from the class. Sensei Gavin explained how he, as a young man chose to leave his parents in California and move to NJ, where he and other of today’s leading US senseis lived in the dojo, learning directly from Sensei Kimura, teaching classes, maintaining the dojo, cleaning after classes and training with each other. The dojo then was not today’s modern, air conditioned or heated dojo. It was a smaller, simpler place of learning without the comforts and amenities which are used to, yet it didn’t stand in the way of Sensei Gavin because he had made a choice to be the very best he can.

The decision, the CHOICE, is yours.

If your children make that same decision, and stick by it through thick and thin, not only will they most likely achieve becoming the very best they can but they will likely surprise themselves when they discover that their very best is far, far better than they had initially envisioned!

Proof of that is in this quote:  “My goal is to win an Olympic gold medal. After all, not many people in this world can say, ‘I’m an Olympic gold medalist.’ ” This was the response by a well known athlete before participating in his first Olympic Games, in 2004. Today, three Olympic Games later and only 28 years old, this athlete is the most decorated gold medalist of all time. The athlete is Michael Phelps.